When going out on the water, one of the things a fisherman has to know is whether or not they’ll be fishing in freshwater or saltwater. While it’s all water in the end, freshwater and saltwater have distinct differences (other than the salt, of course). From the type of fish to the weather, each poses different advantages and disadvantages that you need to be aware of before going out on your fishing trip. 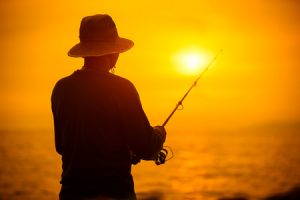 From winding rivers to the Great Lakes, most in-land fishing spots are made up of freshwater (with some exceptions, of course). Here’s what you should know:

The fish are smaller, but easier to catch

Granted, with the wide variety of lakes, rivers, and reservoirs at our disposal, big freshwater fish do exist. But on the whole, freshwater fish are smaller, and thus easier to catch.

Because the fish are smaller, and there are less hazardous conditions on a lake than an ocean, freshwater fishing is best for beginners. And if you’re just starting out, finding a small hamlet with small fish is a great way to practice your fishing skills.

Fuel bills, tackle costs, and more are generally less expensive that saltwater fishing. This is because you’re covering less ground—err, water, we should say—on a river than you would in the ocean. Saltwater equipment is also built to protect against the corrosive properties of salt, making them more expensive.

96.5% of all water on Earth is saltwater, so chances are you’ll be fishing in saltwater more often than freshwater. Here’s what you should know:

The fish are bigger, but harder to catch

The ocean offers a wide variety of fish, and these are generally bigger than the kind you could find in a river or lake. But this also means they’ll be harder to catch. For the experienced fisherman, this provides a great excitement factor, but it can prove a challenge to beginners.

While freshwater fishing is simple and calming, the bigger fish and wide expanse of water provides for a more enticing experience. There’s nothing quite like traveling across the ocean, fighting every huge fish you can find.

There are always lots of fishing spots

In a lake, reservoir, or river, you’re restricted to a small area and most likely competing with other fishermen. However, the ocean is wide and vast, offering ample opportunity for fishing.

Overall, both bodies of water have their advantages and disadvantages. But why not have the best of both worlds? The Maryland Chesapeake Bay has a unique combination of freshwater and saltwater for you to choose from. So if you’re interested to give both a try, contact Miss Susie Charters to book a trip.